Budget 2022 had proposed to create the tax-free First Home Savings Account (FHSA) to help first-time home buyers save up to $40,000  for their first home.

Similar to an RRSP, contributions to an FHSA would be deductible against income.  However, in contrast to an RRSP, any income earned in an FHSA along with any qualifying withdrawals from an FHSA that were made to purchase a first home would be non-taxable, similar to how income and withdrawals of a TFSA are treated.

Some important features to note include:

The federal government recently proposed an accelerated deduction on eligible capital purchases for Canadian Controlled Private Corporations (CCPC’s).  This accelerated deduction will be available for the years 2021 through 2023. When this measure is passed, it will allow for the immediate expenditure of new asset additions with a cost of up to $1.5 million each year.  The rules apply to most depreciable property purchased after April 19, 2021, but excludes certain assets, such as buildings and intangible assets.

END_OF_DOCUMENT_TOKEN_TO_BE_REPLACED

CRA announced that older seniors will receive a one-time $500 Old Age Security Pension (OAS) payment during the week of August 16, 2021.  It is meant to help support seniors’ higher expenses and will apply to any seniors that are eligible for the OAS pension in June of 2021.

No action is required by seniors as they will automatically receive the additional payment as long as they are eligible for OAS.

CRA also announced that the Guaranteed Income Supplement (GIS) and the Allowances will also be adjusted for inflation. 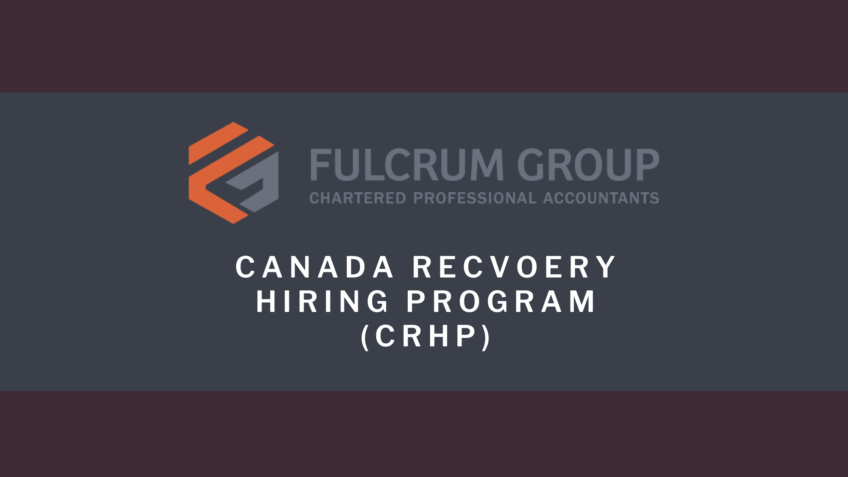 The CRHP is included in Bill C-30 which is currently before Parliament, and if approved will help offset a portion of reopening costs for businesses caused by increased employee wages and hours.

END_OF_DOCUMENT_TOKEN_TO_BE_REPLACED

Copyright ©2022 Fulcrum Group. All rights reserved. About this website.